Compilers take computer programs and translate them to the binary machine code processors actually run. Two of the most widely used compilers are completely free and open source: GCC and LLVM. In this article we look at two recent industrial research projects supported by Innovate UK, the government’s innovation agency, which advance the state of the art with these compilers.

The MAGEEC project, a joint project between Embecosm and Bristol University, is an open source machine learning framework for any compiler, which allows the compiler to be trained to generate more energy efficient code. A side-benefit is that energy efficient code turns out to be much faster code.

Superoptimization as a technique to achieve the ultimate in compiled performance has been around in academic circles for nearly 30 years.

During the summer of 2014, Innovate UK funded a feasibility study to see whether any of these techniques were commercially viable. The good news is that some techniques could now, or with a modest amount of further industrial R&D, offer exceptional benefit for real-world software. And once again the software is open source.

A study carried out by James Pallister at Bristol University and funded by the UK compiler development company Embecosm in summer 2012 found that choice of compiler optimization  flags had a major effect on the energy consumed by the compiled program. The bad news was that the options to be used varied from architecture to architecture and program to program [1].

The MAGEEC project was funded by the Technology Strategy Board (now Innovate UK) under its Energy Efficient Computing initiative, to develop a machine learning based compiler infrastructure capable of optimizing for energy. Running from June 2013 to November 2014, it was a joint feasibility study between Embecosm and Bristol University, to develop a machine learning compiler infrastructure that could optimize for energy. Key criteria were that the infrastructure should be generic, it should optimize for energy, that it should be based on real energy measurements, not models and that it should create a fully working system. The entire project was free and open source. END_OF_DOCUMENT_TOKEN_TO_BE_REPLACED

The BCS Open Source and Software Practice Advancement specialist groups are hosting a workshop which looks at embedded computing for kids. The event will be held on Wednesday 1st April 2015 at BCS HQ – 5 Southampton Street, London, WC2E 7HA from 6:00pm to 8:00pm. 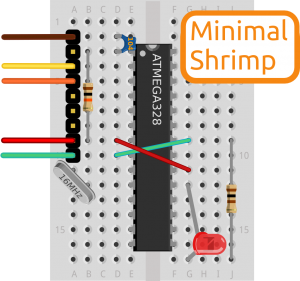 The Shrimp is an incredibly fun, low cost computer that can be built and programmed by just about anyone, in only a few hours and with no prior experience of electronics or programming. Comprising of a simple circuit that is assembled from a handful of components, it can quickly be made to flash LEDs and put to use in exciting projects that have switches, sensors and outputs.

During this workshop participants will first construct the basic Shrimp circuit, before programming it to blink a single LED, and then go onto a more advanced project – such as adding more LEDs and programming it to paint letters in the air with these as it is waved about (using a phenomenon termed persistence of vision). At the end of the evening, teams will demonstrate the fruits of their labours to each other and there may well be some Easter eggs to share around as a reward!

END_OF_DOCUMENT_TOKEN_TO_BE_REPLACED

OpenCon 2014 London will feature leading speakers from across the Open Access, Open Education, and Open Data movements, including a combination of live speakers and videos from the OpenCon 2014 Washington event.

The talks will be interspersed with interactive group discussions themed around the session topic.

OpenCon 2014 London is a half-day event hosted by Imperial College London (at the Huxley building on 180 Queen’s Gate) with discussions continuing at a nearby pub/restaurant in the evening.

For more details, and to register for a free place, please see the eventbrite page at: http://www.eventbrite.com/e/opencon-2014-london-tickets-13952172323

Interested but not able to make it to London? Attend a satellite event near you (or the OpenCon2014 conference itself in Washington, USA) here: http://opencon2014.org/takepart

The even will take place at the Southampton Solent University, Reginald Mitchell Building, East Park Terrace, Southampton, Hampshire, SO14 0RD, starting at 4 p.m..

Booking is recommended, via margaret.ross@solent.ac.uk (please put BCS Hampshire Editathon in the subject). As we are using a laboratory, there is no need to bring your own equipment.

The Open Source Specialist Group  (OSSG)  will be holding a meeting dedicated to Open Source compilers.

The current sessions are:

END_OF_DOCUMENT_TOKEN_TO_BE_REPLACED

Register for your tickets at: http://lpi-uk.eventbrite.co.uk/

Jon “maddog” Hall is the Executive Director of Linux International (www.li.org), an association of computer users who wish to support and promote the Linux Operating System. During his career in commercial computing which started in 1969, Mr. Hall has been a programmer, systems designer, systems administrator, product manager, technical marketing manager, author and educator.

He has worked for such companies as Western Electric Corporation, Aetna Life and Casualty, Bell Laboratories, Digital Equipment Corporation, VA Linux Systems, and SGI. He currently works as an independent consultant, and is currently involved with bringing environmentally friendly computing to emerging marketplaces through Project Cauã (www.projectcaua.org), as well as consulting for Futura Networks, the parent company of Campus-Party.org

Mr Hall has worked on many systems, both proprietary and open, having concentrated on Unix systems since 1980 and Linux systems since 1994, when he first met Linus Torvalds and correctly recognized the commercial importance of Linux and Free and Open Source Software.

He has taught at Hartford State Technical College (HSTC), Merrimack College and Daniel Webster College. While at HSTC his students gave him the nickname of “maddog”.

Mr. Hall is the author of numerous magazine and newspaper articles, many presentations and one book, “Linux for Dummies”.

Mr. Hall has consulted with the governments of China, Malaysia and Brasil as well as the United Nations and many local and state governments on the use of Free and Open Source Software.

Mr. Hall serves on the boards of several companies, and several non-profit organizations.

Mr. Hall has traveled the world speaking on the benefits of Open Source Software having received his BS in Commerce and Engineering from Drexel University, and his MSCS from RPI in Troy, New York.

It is envisaged that the workshop will compare some of the leading Open Source CMS such as Drupal, Joomla, and Plone for social networking purposes. However the scope of the workshop has been deliberately left open so as to allow for discussion of other Open Source CMS and other relevant matters.

Robert Castelo, Director Code Positive Limited who has organized various events in London for Drupal (http://www.drupal.org) open source CMS will give an introduct to Drupal focusing on social networking.

Alan Milligan, Convenor, Open Source SIG, NSW chapter of the Australian Computer Society, has been running a Plone ECM practice for the best part of a decade and will be giving a presentation on Plone and social networking.

There will be no fee to participate in this event and a free buffet and refreshments will be available during the day.

Papers and posters for presentation are being sought along with a call for those just wishing to attend and participate. It is envisaged that the workshop will consider:

(1) What is the state of the art in Requirements Elicitation for Open Source Software?

(2) How Open Source methodology might best be used in Requirements Elicitation generally?

Those currently presenting papers at the workshop include:

Ian Alexander, Scenario Plus http://www.scenarioplus.org.uk and Chair of the BCS Requirements Engineering Specialist Group (RESG) whose forthcoming book ‘Discovering Requirements’Ã‚Â is soon to be published by Wiley in February 2009.

There will also be presentations by:

Conrad Taylor, Chair of the Electronic Publishing Specialist Group (EPSG) and Kemi Adeboye, Southbank University – Usability is a Requirement Ã¢â‚¬â€œ how easy is it to achieve in Open Source projects?

Cornelia Boldyreff, Professor of Software Engineering, University of Lincoln Ã¢â‚¬â€œ OSS Software Engineering meets Social Networking: Building Communities. This will include detail of some of the work being carried out by the Centre for Research in Open Source Software (CROSS) at Lincoln.

There will be no fee to participate in this event and a free buffet and refreshments will be available during the day.